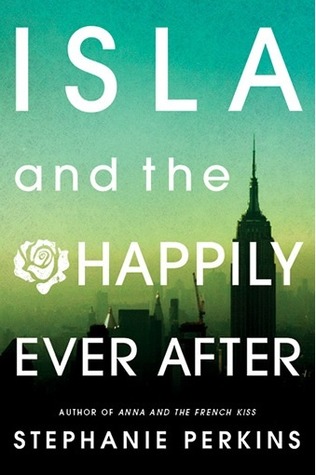 Love ignites in the City That Never Sleeps, but can it last?

Hopeless romantic Isla has had a crush on introspective cartoonist Josh since their first year at the School of America in Paris. And after a chance encounter in Manhattan over the summer, romance might be closer than Isla imagined. But as they begin their senior year back in France, Isla and Josh are forced to confront the challenges every young couple must face, including family drama, uncertainty about their college futures, and the very real possibility of being apart.

Featuring cameos from fan-favorites Anna, Étienne, Lola, and Cricket, this sweet and sexy story of true love—set against the stunning backdrops of New York City, Paris, and Barcelona—is a swoonworthy conclusion to Stephanie Perkins’s beloved series.

I started reading this because it has been sitting on my shelf for so long, just waiting to be picked up. When I was about done though, a personal problem came up and then I was desperate. Desperate to escape the cruel reality, that is. Something horrible has happened and I don’t know how to make things easier for me and my family, so I decided to escape from my problems . I couldn’t think of any other thing more perfect than reading. Despite the chaos going on outside the four walls of my bedroom, I read. And read, and read. I got lost in Isla’s world and before I knew it, I  forgot my problems and was closing the book, bawling my eyes out.

First of all, let me just say that  you don’t effing know how much I missed Anna and St. Clair… And Meredith, and Josh, and Lola and Cricket, and all the banter too. *stares guiltily at the floor* Okay, you caught me. A small part of me only wanted to read this one in hopes of getting a glimpse of Anna and St. Clair again.

This book just made me so nostalgic of Anna and the French Kiss, and you know how much I love that, . I really love the setting, School of America in Paris (SOAP) because I kind of got this cozy and homely feel to it because of AatFK. And I really grew attached to that setting from the first book so it was so nice to have read another story that takes place there.

Now enough with Anna and the French Kiss. Although Isla and Josh technically already have had feelings for each other before this book started, I can’t shake the feeling of insta-love I’m getting.

You know how with some books you feel like the story unfolds right in front of you?  But there’s those ones that just grab you out of reality and plunges you in its world; this is one of those books.

In terms of the female main characters of this series, I didn’t really feel attached to Lola and Isla compared to how I felt for Anna. About Lola, you can about read that on my review here. But let’s talk about Isla. When the book began, I was immediately starting to warm up to her. She’s just like me. Just minus the really high grades and the charisma, I can really see the few similarities with our personalities. But as the story goes on and as her relationship with Josh was tested, I was kind of unreasonably irked. Unreasonable because I still got annoyed with her although I know that it was the jealousy and insecurity fueling her insensitive words and actions. But as the development of her character goes on, my unease started to fade.

Josh is my absolute favorite character in this story. He is just one of the best boyfriends anyone can ever ask for. He is so considerate. Even though he often breaks rules, he becomes hesitant to do things that might endanger Isla’s record and reputation. He is such an understanding guy, I bet his patience is longer than the River Nile. Seriously. Despite all the hurtful things everyone tells him, he still doesn’t lose his shit. Plus he can freaking draw! He has unrealistic skills.

I would’ve loved to get to know Kurt a bit more. He’s just such a sweet guy and he seems like the ideal (boy) best friend for me. I was so sad when he got mentioned less and less when Isla and Josh started dating.

And Hattie, I just have to mention Hattie. She is Isla’s youngest sister and despite all her bitchiness, she isn’t as bad as she seem to be. And holy shit. This book might have just solved one of the things that I’m too stupid to realize: why my youngest sister always does stuff to get under my skin.

At first I thought that the majority—if not the entirety — of this story would focus on Isla’s relationship with Josh, so I was pleasantly surprised to find out that there was a bit of development in the family aspect as well.

And finally, the ending is so perfect. I won’t go on about it because of  spoilers.

I recommend this book to lovers of contemporary. Although I gave this one a perfect rating, it still isn’t gonna land on my favorites shelf simply because I didn’t like it enough for it to be put there. I don’t mean to be harsh as this book really is great, but that’s just how I feel about it.

All book cover photos and book info (such as summary, publication, etc.) are taken from Goodreads.

P.S. Hello friends, I’m back. Finally, I will admit defeat to myself since I’ve realized that it is impossible for me to keep this blog going all-year round. School is just so hectic as most of you probably know, but I just really love blogging so I can’t abandon this. Therefore, I made a compromise with myself that I would just keep on blogging every summer vacation then take a break whenever school starts again. And, oh, in case some of you were wondering this review was written almost a year ago, and it has been sitting in my drafts, waiting to be uploaded. I haven’t read any books this summer yet but I’m looking forward to reading tons. Thank you and have a great day!