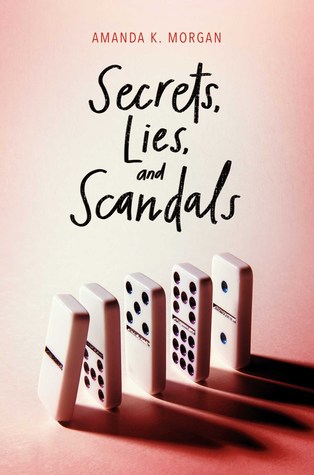 In the tradition of I Know What You Did Last Summer and How to Get Away with Murder, five teens must overcome their paranoia in order to keep their teacher’s death a secret in this fast-paced suspense thriller.

Nothing ruins summer vacation like a secret…especially when it involves a dead teacher.

Ivy used to be on top of the social ladder, until her ex made that all go away. She has a chance to be Queen Bee again, but only if the rest of the group can keep quiet.

Tyler has always been a bad boy, but lately he’s been running low on second chances. There’s no way he’s going to lose everything because someone couldn’t keep their mouth shut.

Kinley wouldn’t describe herself as perfect, though everyone else would. But perfection comes at a price, and there is nothing she wouldn’t do to keep her perfect record—one that doesn’t include murder charges.

Cade couldn’t care less about the body, or about the pact to keep the secret. The only way to be innocent is for someone else to be found guilty. Now he just has to decide who that someone will be.

With the police hot on the case, they don’t have much time to figure out how to trust each other. But in order to take the lead, you have to be first in line…and that’s the quickest way to get stabbed in the back.

I’ve been wanting to pick up this book for a while now. Ever since I saw it on Book Outlet, blurbed as perfect for fans of the TV show How to Get Away with Murder, I knew I had to read it. Fast forward a several months and a Kindle deal later, I finally got to read it.

Secrets, Lies, and Scandals is a fast-paced thriller that keeps readers on the edge of their seats. At least, it had that impact on me. I was reading this non-stop because I just HAD to know what happens next.

The book is told in alternating perspectives of the five main characters: Ivy, Mattie, Kinley, Tyler and Cade. In my opinion, the most well-written character is Tyler. I found that among the five, he was the one I truly felt for. I sympathized with him especially with everything that’s been going on.

Other than that, I loved how each one of them has their own tricks up their sleeves which made their actions quite unpredictable. They were clever and independent on their own, but they couldn’t act brashly because they could all come crashing down. They were all good at manipulating other people and each other.

Also, I can’t resist not sharing the first sentence of the book:

“There should be more blood.”

The moment I read that, I got the feeling that this would be a gripping read. Besides, the promise of having a similar vibe to the hit TV show How to Get Away with Murder delivered, in retrospect. (Well, at least the part where a bunch of students killed someone.) Although I have to say, the means of killing the teacher in the book was a bit underwhelming for me. They could have done with something a bit more gruesome for the drama  talking. And lastly, I would just like to say that however forced and instant the romance in this book was, I truly believe that it wasn’t completely unnecessary.

Honestly, I had a hard time rating this book. I changed my star rating on Goodreads, like, three times, debating whether it was a 3- or 4-star read. But in the end, I really think this one deserves its 4 stars. This book is jam-packed with secrets, lies and scandals (see what I did there?) that indeed made it such an enthralling story. I recommend this one if you’re looking for a quick thrilling read.